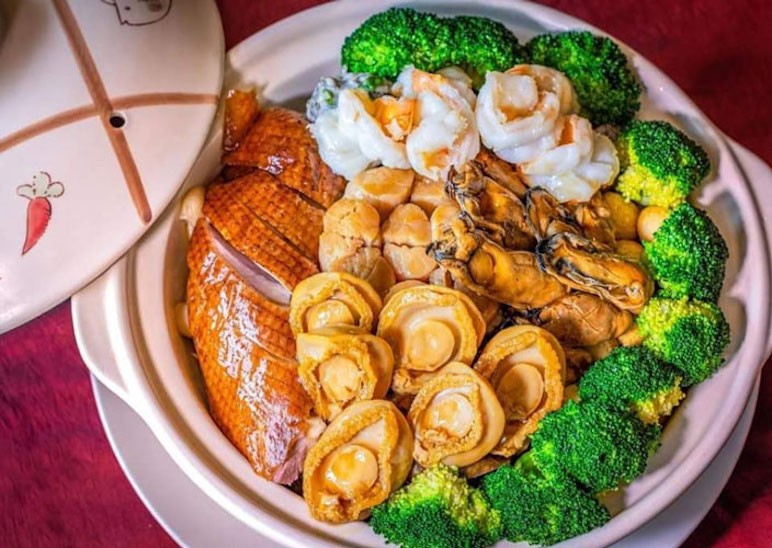 Well, well, well, it’s time for Chinese New Year once again. Intrigued but mystified by this most important of traditional Chinese holidays? We’ll lead you through the top five festive Chinese dishes and their symbolic meanings. With these snacks in hand, you can enjoy a happy, auspicious and prosperous New Year! Nian gao, or rice cake, is made from glutinous rice and is very popular during Chinese New Year, although it can be eaten year-round. People consider eating nian gao during this time to be good luck because the name is a homophone of ‘higher year.’ ‘Nian’ (sticky) is identical in sound to ‘年，’ meaning ‘year,’ while the word ‘gao’ (cake) is identical in sound to ‘高，’ meaning ‘high’ or ‘tall.’ As such, eating nian gao symbolizes self-improvement: raising oneself taller and doing better in the coming year.

The sticky and sweet snack is made differently in various regions of China. In Ningbo, white watermill nian gao is most popular, while in Wenzhou, brown sugar rice cakes are the most prized (it’s believed that they lead to a ‘sweetened life’). In the North, these sweet cakes are either steamed or fried, while in the South, there are nian gao soups and stir-fries in both sweet and savory flavors. Made from glutinous rice flour, these ball-shaped dumplings are cooked and served in boiling water, the name tangyuan in Chinese a homophone for ‘union.’ Large or small, filled or unfilled, they are traditionally eaten during the New Year and Lantern Festival, and can also be served as a dessert at wedding banquets, Winter Solstice Festivals or any occasions symbolizing family togetherness.

Taste preferences can change between the northern and southern regions of China. Generally speaking, people in the South prefer sweet fillings, which usually consist of sugar, sesame, sweet bean paste, osmanthus flowers or sweetened tangerine peel. In the North, people prefer salty fillings like minced meat and vegetables. In Shanghai, however, both fillings are eaten. Which style is better? You decide. Perhaps the most famous food associated with Chinese New Year, jiaozi dumplings are believed to bring prosperity, thanks to the fact that they look like the gold ingots (yuan bao) used as currency during the Ming Dynasty. The name also sounds like the word for the earliest paper money. Many families eat jiaozi on Chinese New Year’s Eve or on the first day of the year because it’s a homophone of ‘交子’ (jiaozi), referring to the intersecting moment between the old year and the new; eating them is believed to bring good fortune to the household.

Consisting of ground meat and/or vegetables, jiaozi can be cooked in boiling water, steamed or fried to a golden crisp. In northern parts of the country, these horn-shaped treats are eaten year-round as a main course. Usually served as the last dessert for a New Year’s Eve dinner, eight-treasure rice is especially popular in the South, and is made from glutinous rice steamed and mixed with lard, sugar and eight kinds of fruits or nuts. These can include red dates, lotus seeds, longan, raisins, walnuts, peanuts and more.

Each ingredient of the colorful and sweet dessert has its own meaning. The lotus seeds represent a harmonious married life, longan signifies reunion, red dates are wishes to have a healthy baby, pumpkin seeds mean ‘safe and sound’ and other preserved fruits symbolize life going smoothly. Although the ingredients have gradually become simpler over time, the basics of this auspicious dish have remained the same for generations. This Cantonese dish was first made in a Hong Kong fishing village during the Song Dynasty (970-1279). Legend has it that, to serve the young Emperor and his army who fled to the South during battles against invading Mongol troops, locals collected the best ingredients available and cooked them all together in wooden washbasins, since during wartime there were not enough conventional pots and pans. Thus poon choi was invented, usually served in large wooden, porcelain or metal basins due to its size and communal consumption.