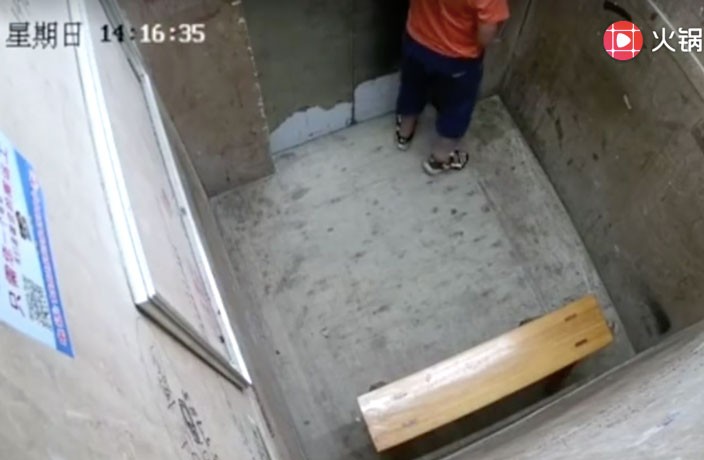 Spend enough time in China, and you’re bound to see a few kids peeing in public places – it would almost be weird if you didn’t.

It’s one thing to take a leak, say, under a bridge, or down the sewer drain of a busy walking street – when you gotta go, you gotta go – but this week a boy in Meizhou, Guangdong province took things a step further, relieving himself on an elevator control panel inside a residential building.

In the surveillance video, which was posted online on July 7, the boy stands directly beside the elevator buttons and drains himself. He then hangs around until the door opens and heads out, leaving the mess, and resulting technical problem, for the next person to ride.

Watch below to see it all go down (VPN off):

When an unsuspecting woman enters the elevator shortly thereafter, she begins to reach for the control panel, only to jump back and flee at the sight of flying sparks – the result of a urine-induced short circuit.

It is possible the young man just really had to go, but one has to ask: If you must pee in the elevator, why aim for the buttons?

More likely is that he got a kick out of the notion that some poor sucker would have to touch the sticky panel and then ride in an enclosed space that smells like ammonia – but we can only speculate.

In addition to a good scolding, one Weibo user noted that the prankster or his family will be fined RMB1,000 for the damages caused to the elevator.

Perhaps unsurprisingly, this isn’t the first time that someone taking a piss in an elevator has gone viral in China. Last year, a boy in Chongqing fell victim to his own prank, when he got trapped in an elevator after letting out a stream of pee all over the control panel.