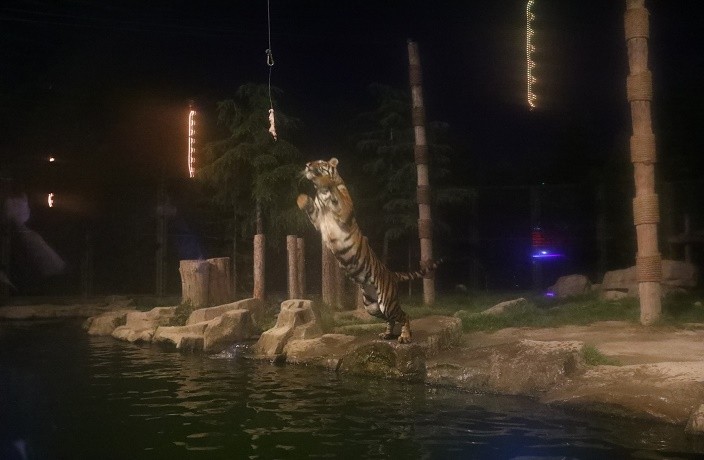 Last month, we reported that the Shanghai Wild Animal Park was planning to extend its visiting hours into the night. After weeks of preparation, the zoo will officially begin welcoming visitors at night starting Thursday, reports Shine.

The first night zoo in the world was established in Singapore in 1994. However, the concept of nighttime zoos is brand new in China and the Shanghai Wild Animal Park is the first of its kind.

“There are many wild animals out there which are nocturnal,” explained Zhong Yi, deputy general manager of the park. “Visitors will see different sides of them if they come in the evening.” According to Zhong, animals like lions, tigers and raccoons are extra energetic after the night falls.

Images via The Paper

Together, more than 5,000 animals from over 100 species will be on display during the evening hours. Tourists will find tigers fighting for food, black bears playing in the pool and squirrel monkeys jumping among the trees.

Images via The Paper

Many have expressed concern that extending the park’s operating hours into the evening may have a negative impact on the animals. According to Zhong, the zoo has handpicked the animals to ‘work overtime’ after assessing their nature. In addition, they plan to make adjustments based on the animals’ adaptability once the program launches.

Starting Thursday, guests can visit the Shanghai Wild Animal Park each evening from 4pm to 9pm and nighttime admission will be RMB60 (USD8.50). Those who purchase day tickets for RMB130 (USD18.40) can enjoy the nighttime hours as well.