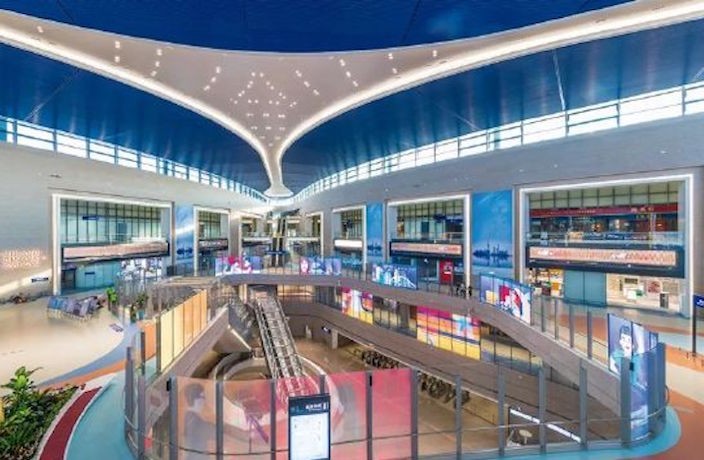 Local authorities announced on Monday that the airport’s new satellite terminal will begin operation on September 16, and is believed to be the largest of its kind in the world, according to Xinhua. The new airport building will cover an area of 622,000 square meters, roughly one and a half times the size of Tiananmen Square.

Coinciding with the 20th anniversary of Shanghai’s largest airport, the terminal will provide arrival, departure and transfer services and will be located around 700 meters from the airport’s terminals 1 and 2, or 2.5 minutes by MRT.

The satellite terminal, which will be split up into two areas denoted by the letters S1 and S2, will have 90 boarding bridges and 125 aprons (aircraft parking spaces) and will reduce the need for remote boarding and shuttle buses at Pudong Airport.

According to Shine, the new terminal will allow for Pudong Airport to handle 80 million passengers, 6 million more than last year, and put the airport on par with London Heathrow in terms of passenger traffic. Combined with Hongqiao International Airport, Shanghai airports will be able to service in excess of 120 million passengers annually by 2020. In 2018, Shanghai had a passenger throughput of 118 million, coming in at fourth most in global cities.

Construction on the new satellite terminal began back in 2015, as the airport exceeded its 42 million annual passenger volume. While the airport underwent previous upgrades, new additions to the city, such as Shanghai Disney and the Shanghai Pilot Free Trade Zone, have ensured that more and more tourists and business travellers are coming to Shanghai each year.

See photos of the new terminal below: