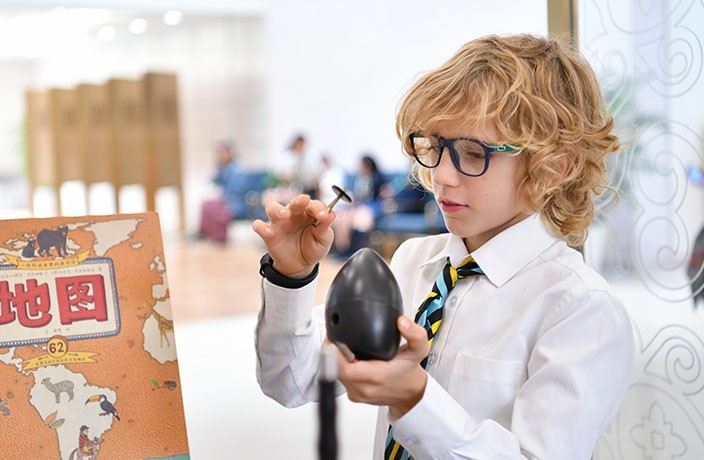 Kool Koor, a pioneer in the graffiti art movement, recently spent a week at WISS. Transforming their classrooms into his studio, students had a first-hand look at what it takes to be a working artist. He also helped students create their own pieces. He wrapped up his week at WISS with a great talk about the emergence of the graffiti art movement, his role and his thoughts about the evolution of this street art. YK Pao School Head of Outdoor Education, Mr Betts, led a group of 15 students to Zhuji in Zhejiang province for several days of hiking through bamboo forests, around temples and up a hilltop overlooking a reservoir. After a relaxing boat ride, students discussed and reflected on their challenging day. The next morning, students hiked the ‘Five Waterfalls Trek’ before making their way back to Shanghai. October 28-31 saw Wellington pupils enjoy the College’s sixth Arts Festival, which was the biggest and most ambitious to date as it welcomed over 30 artists drawn from diverse industries such as filmmaking, sound artistry, photography, animation, fashion design, art curation, architecture, theater and broadcasting.

Constructed around the theme of ‘Looking and Seeing,’ this year’s festival gave Wellingtonians the opportunity to explore artistic disciplines in ways that would open their senses to the deeper meaning of being able to understand and evaluate the world around them. Dulwich College International (DCI) broke the world record for the largest environmental sustainability lesson held in multiple venues. The lesson, co-designed with students, is part of DCI’s broader sustainability education efforts, which aims to create future leaders who will champion sustainability across the globe. Hosted at Dulwich College Shanghai Pudong, the lesson was livestreamed to all 13 DCI schools, and over 3,000 students were counted as official participants by GUINNESS WORLD RECORDS™ representatives. During the lesson, these students pledged to make changes in their daily lifestyle and to be change-leaders in their families and communities. With the holidays rapidly approaching, students have been busy preparing for the Christmas celebrations. NAIS Pudong kicked off the festive season with student choristers performing at the Kerry Hotel Pudong Tree Lighting Ceremony on Saturday, November 23. Year 5 and 6 students were very excited to showcase their talents to the school community in their production of Aladdin Trouble. The long-awaited Christmas Bazaar took place, bringing a fun-packed and entertaining evening for all – with a surprise visitor on the night! Next up is their Christmas Carol concert in early December, while it will soon be the turn of NAIS’ youngest students to shine when their Early Years students take to the stage in their production of Away in a Manger. Finally, to close the festive season, NAIS’ eagerly anticipated Christmas lunch will take place when students and parents can enjoy a delicious traditional festive meal together. Merry Christmas!