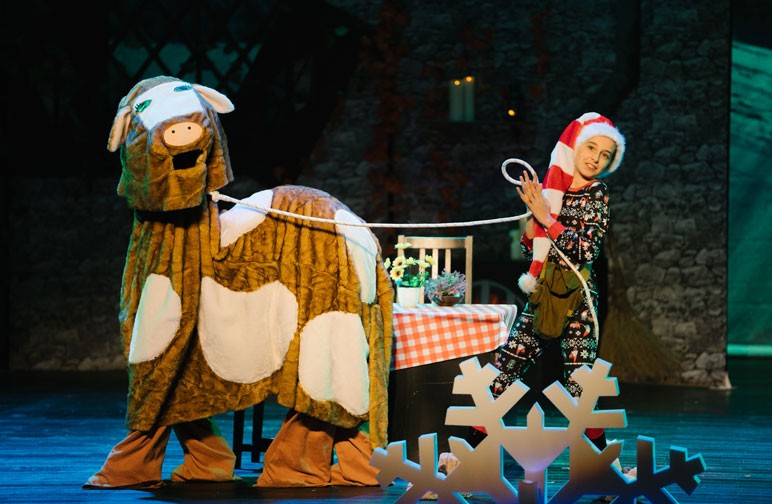 Huili Nursery Shanghai pupils took part in an interesting activity based on the theme of ‘four seasons’ during Huili Nursery Arts Festival.  Teachers prepared small canvases and various materials for pupils and introduced different artists with varying representatvie stlyes, such as Yayoi Kusama, the princess of polka dots and a representative of pop art, who uses bright colours and dots to express her artistic thoughts; Eric Carle,

illustrator of collage art, who uses collage to create his illustrations; and Dutch abstract painter Piet Mondrian, who adopted lines and three primary colors to paint. Appreciating different artistic styles enabled pupils to attempt to express themselves by utilizing the formats that spoke to them artistically. Their interactions with peers also helped them to learn from each other and strengthened their bonds of friendship. The British International School Shanghai held a very successful Christmas Fair. Even the weather was magically British – wet and cold!  Despite this, the school community enjoyed many festive delights, including Christmas carols from their excellent choirs, whilst warming up on festive refreshments. Each of the 80 vendor brought a little piece of Christmas fun with them.  The Parent Event Team and IB students helped to organize the Fair and raised a significant amount of money for their respective charities, Heart-to-Heart and the Indochina Starfish Organisation. A great school community event and a Happy Christmas to all BISS families.

Dulwich Puts the ‘Shake’ into Shakespeare How amazing were Dulwich Puxi senior school students in December? For those of you who were lucky enough to watch their senior school production this year, we think you’ll agree that the children took Twelfth Night and made it their night. They had so much fun with the story, which is particularly impressive as Shakespeare does not present an easy language task for young students; it is challenging to decipher the language and meaning of a Shakespeare tale. And then to bring emotion to that language – those pauses for dramatic effect, those witty punch lines, the art of the ridiculous – they took this complex comedy, and they owned it! The WISS annual fundraising event is always filled with the #WISScommunity spirit. This year, they made it brighter than ever with more than six kilometers of lights that decorated the school, embracing many cultures from around the world. The most important reason they organize WISStival is to help others, and this time they collected more than RMB36,000 for charity projects. To be a success, a pantomime needs to tick a lot of boxes – it should establish a heartwarming sense of community, while also being packed with jokes, physical comedy and topical references, as well as a healthy helping of saucy asides. It also has to zip along at a cracking pace. This is exactly what Wellington College’s Upper Prep delivered in their rendition of the pantomime Jack and the Bean Tin, performed in December to a full theater. An incredibly talented group of 30 pupils helped bring alive the fun-filled story of true love and the acceptance of being different. The cast worked tirelessly and it all came together in two magical evenings of entertainment just in time to welcome Wellington’s festive season.